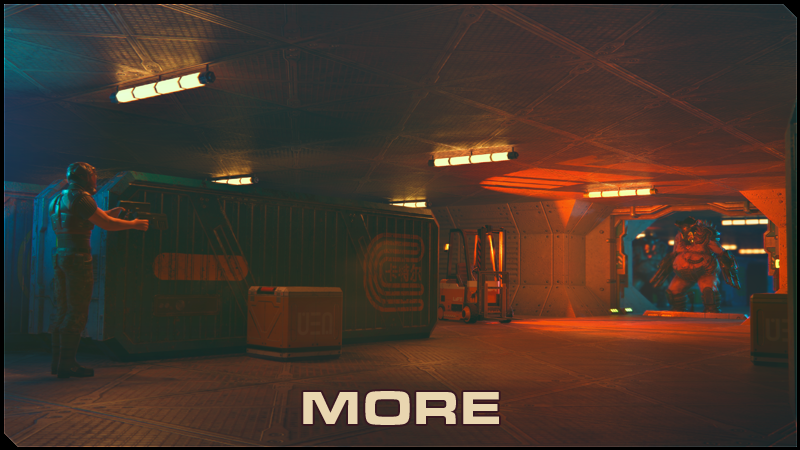 Jupiter Hell 0.9.9 "More" is live! We bring you more message-objectives, more objective mechanics, more animation improvements, more trait and station usage options, and many, many, MANY more exotics! Want to know more? See for yourself, and read all about it below!

Our unique objective system moves to stage 2 - now one of the three branches per moon is locked, and a message will tell you how to unlock it. More importantly, we introduced mini-level quests, also found through messages, that pose bite-sized optional challenges with potential for really good loot! There are four types of mini-levels of different challenge, rewards and rarity, and all of them have randomized layouts.

The amount of exotics in the game has been more than DOUBLED! Among many new exotics, each with their own unique and interesting perk, you'll notice that now you can find exotic armors and exotic headgear. Some of these are class specific, giving class specific perks - don't worry, they only appear in the loot pool if you play the matching class :).

Oh, almost forgot - there are two REALLY powerful and rare exotic mods to be found!

Several internal improvements to the animation system have been made. The out facing effects are much better directional tracking (like in Onslaught or enemy bot turrets), finally the intended door animations, camera movement improvements and actual elevator doors. Most notably however the player and human enemies will now lean when shooting from behind a corner!

Also... the player can also be gibbed, so don't throw plasma grenades under your feet.

The first thing you'll notice is that you can now delay trait choices for later - maybe you want to decide what build to go for based on the messages found in the Callisto L2 terminal? Maybe you're keeping a Ironman level in store for a small emergency heal? Anyway, you can store trait points and spend them any time in the trait view of your player menu.

The other thing is buffs to three master traits - Onslaught (apart from improved animation) will now work with automatics and SMGs, and will benefit from Sustained Fire. Additionally, the L1 dodge penalty has been reduced to -30%. Survivor now grants a critical chance bonus dependent on your HP (and has changed prereqs), and Blademaster/Bladedancer have now kinda switched places. You can dual wield blades using Bladedancer and Blademaster gives you automatic attacks after move (Blade-kata? :P).

Manufacture stations now have the dismantle option, so if you bring an extra multitool to charge them you can manufacture a new weapon and transfer your old mods to it at the same time.

Enemy count and type that is placed in a level is now based on the experience they give - hence we get a much more consistent level progression and danger level. XP gains between difficulty levels have also been normalized. As a bonus, Callisto L1 is now guaranteed to give you your first trait if you clear all enemies!

We noticed that all existing challenges have been beaten on Nightmare, so we're adding Angel of Exaltation for the 1% of crazy marines out there. Like Nightmare, this Challenge isn't even remotely fair! You've been warned!

Knives have now 50% swap time (why didn't they?), the special loader mod is no more, but a sustain mod is in its' place! Whizkid L2 doesn't grant an extra mod slot, but mod slot counts have been improved.