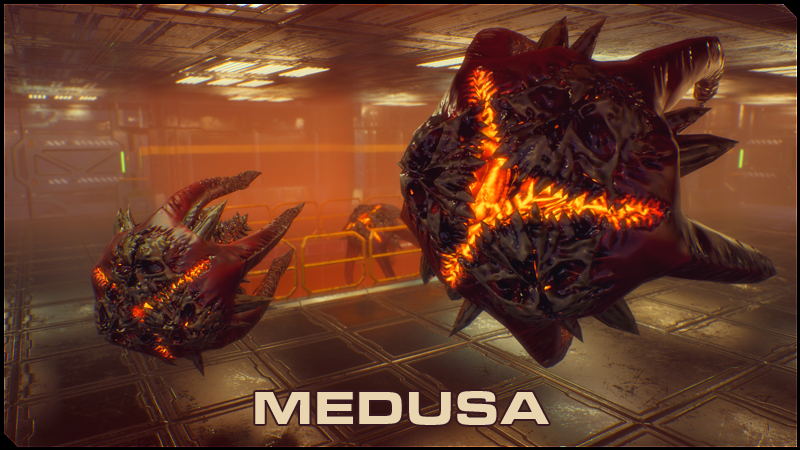 Jupiter Hell 0.9.10 "Medusa"* is live! The highlights of this release are the eponymous enemy, the BIG gun everyone has been waiting for, melee exotics and AMPs, the railgun, UI and FX improvements, rerolling AV perks in manufacture stations, new message-quests, trait upgrades and more! See for yourself and read all about it below!

Jupiter Hell has been lacking truly endgame enemies, since our lovely Summoner subs for the end boss currently. Well this changes today, with the Medusa and its far more dangerous Archmedusa cousin. Be careful, as even a optimized build that steamrolls the endgame may find themselves in a tricky situation when faced with this foe! Oh, and in the meantime, the Summoner didn't want to stay behind, so he got a buff too!

Yes, you know what I'm writing about. The Big F*cking you know what is finally here. Small hint - search for it in CRI Armory or Black Site Vaults. Oh, and another golden era weapon makes its appearance too - the railgun ;).

Melee weapons finally got the treatment of their ranged counterparts - 7 new exotic melee weapons are too be found, as well as dedicated melee AMPs!

Get more control over your AV items (and non-exotic exotic item perks) with the new option available at Mk2 and Mk3 manufacturing stations. A fistful of multitools is the only thing standing between you and your god roll.

Enemy health bars flash indicating the max damage your weapon can do. Barrel explosions nicely chain now. FPS drops from massive amounts of debris are reduced, dissapearing lights have been fixed (though reduce your simple light count in the options if you're on a low-end GPU), top-right damage info for weapons with crit has been improved, and a few minor changes here!

Several minor changes have been made (see changelog below), but the major ones are a much more interesting and powerful Infiltrator L2 and L3, a much more user friendly Juggernaut, Vampyre with armor regeneration, and Swashbuckler finally working as intended!

Each release we improve on the message-quest system, and each release the objectives become more complex. We will always keep them keyword based, and always picking the message up will be optional. This time however, you might want to stick to some, to know what you're getting yourself into ;)

Several major bugfixes have been made. Most notably the Volatile Storage crash should happen no more, and the event looks way more fun too. Several small buffs have been added (i.e. Point Blank now works in ranges 1-2). Oh, and Nightmare! got it's enemy accuracy buff back. No longer will anyone say it's easier than UV ;).

We're slowly leading to the 1.0 release, but keep your eyes open for 0.9.11 with balance changes, more content, generator improvements, and possibly bigger features ;)