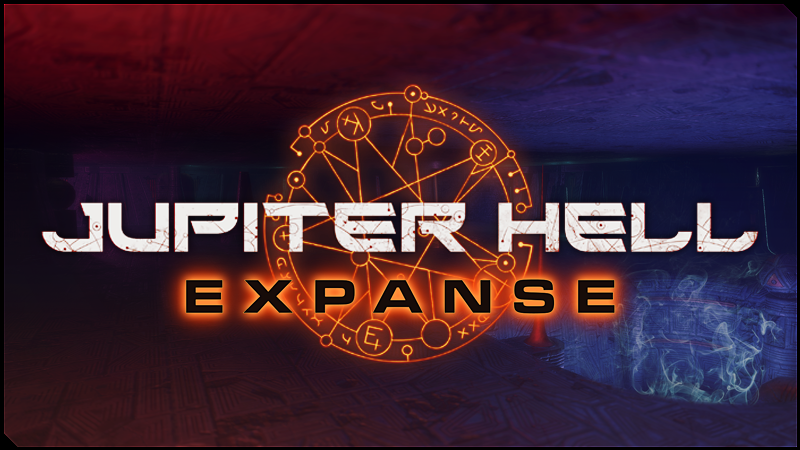 Took us a bit more time, but this release is HUGE! Jupiter Hell 0.9.7 Expanse
features larger moons, mid-point levels, new generators for second halfs of the moons, 4 new branches and 4 new special levels, much improved monster placement and lists, and on top of that a huge rework of traits! But before we go into detail - there’s an important announcement we need to make.

Jupiter Hell has been in Early Access for 18 months now, and we’ve been providing you with a - more or less - steady stream of updates featuring new content, bug fixes, polish, and implementations of your feedback. It’s about time we announce our full release plans.

With 5 more regular monthly updates to go, we’re getting ready to release Jupiter Hell 1.0 on the 5th of August, 2021. To make the most of the full release, we’re teaming up with Hyperstrange, the developer of ELDERBORN and POSTAL: Brain Damaged, who will assume the role of the publisher.

Hyperstrange are good old friends and great fans and supporters of Jupiter Hell. Their ELDERBORN is an Early Access success story, and we’re convinced that if an indie dev needs a publisher at all, they should bring some unique perspective and understanding to the table. Hyperstrange does. They’re already around our Discord, so if you have any questions for them - don’t hesitate to ask!

The first obvious question we can answer right here, right now: yes, we do have updates planned beyond the full release, which also aligns us with Hyperstrange, who also support and expand their games post-launch.

So, there it is - six more months until full release. We’re excited, and we’re shifting gears on the development. Now, back to regular programming! Here's what the Expanse update brings to Jupiter Hell:

Each of the three moons now sports 7 levels. Each moon has a midpoint level, with dedicated generators at level 4. Each moon has different new generators for its latter half, to provide for a more varied and interesting experience when traveling the main route. Additionally, due to the moons being larger, each moon will connect to three branches.

A total of four branches have been added - Callisto Rift, Europa Ruins, Shadow Halls and Noxious Mines. Each new branch has a new special level, Noxious Mines use the old Noxious Hollow, while Infernal Lock has been added to Io main route. Especially of note are Europa Ruins and Shadow Halls which feature a brand new tileset, and especially interesting special levels ;)

As if that were not enough there is a HUGE expansion of traits. Every trait has now 3 levels, and while some higher levels are just additional stats, among the expanded traits some have completely new (or significantly revamped) effects!

Listing every change in this department would make this post longer than anyone would care to read so either read the descriptions in game, or the massive changelog below!

Interesting traits to note are the new Sysop trait, the Headshot trait enhancements (and changing it to a on cooldown effect so you can now take it with Wizard), 3 levels of Toxicologist, the scout Infiltrator trait, the really fun 2 new levels of Remote Hack, the redesigned Swashbuckler trait, the new Cover Master trait... actually, you'd just better fire up the game and read the trait descriptions anew :D

You'll be able to take advantage of the new trait levels, as the expanded moons result in more XP!

As we merged some traits together, and removed a few underused traits, we're left some space to add new exciting traits in the future too!

The game we all know is known for its huge fights, and Jupiter Hell can't be any different! Monsters now more often get generated in larger packs, especially at higher difficulties, leading to more exciting fights and a better challenge once you're already rocking that Master Trait of choice ;). We also balanced late game spawns better - Io and Beyond won't be a cakewalk anymore.

That's no moon, it's the changelog!

Next release is tentatively named 0.9.8 Resolve, will be out within the next month, and will bring a lot more agency to the player ;)

That’s it for today. May RNG be forever in your favor!
Yours,