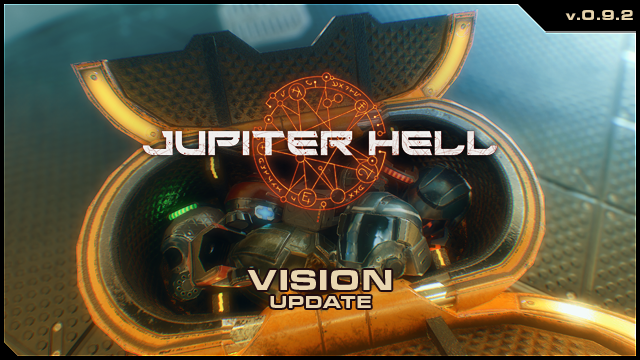 After a longer break (much needed since we've been crunching since launch), we present 0.9.2 Vision! The three biggest additions this time is the enabling of the head slot, with various associated items that have their ADV versions too, changing the vision range on some levels (lower or higher) and two new special levels!

The head slot is finally functional! While the base helmet just protects from critical hits (like the imp or reaver charge attack), stronger helmets carry a slight armor bonus. ADV versions come with a subset of armor perks. Visors and gasmasks however drop always ADV and have their own brand new pool of perks related to vision, scouting and hacking!

Up until now vision range was hardcoded. Now you'll often encounter levels with reduced vision range - carry a shotgun and beware of melee enemies! Or, find a nice visor with Nightvision. Some caves have a higher vision range, giving more strength to long range weapons. Further along we might reduce the sight range of some enemies and make them operate on scent and sound alone, but that's for a future update! We took this occasion to tinker with the default camera settings too - the camera will adapt to vision range, and show stuff at a slightly better range.

We've added one alternative level that can spawn instead of the Warehouse on Io, with a strong theme, new mechanics and an unique reward. On Europa, Refueling Base can also be swapped for a new level, The Pit. To avoid spoilers I'll end this paragraph here :).

7.62 sidearm got a damage buff, and assault rifle got it's range nerfed a bit. We've also significantly increased the duration of the EMP effect. Also melee weapon drops are now more common.

Drones can now actually fly over gaps, so don't be surprised if you're flanked on Callisto Spaceport :). Also, while adding helmets we noticed that green/blue/red as a descriptor is kind of boring - both armor and helmets now follow a new naming - basic (green), marine (blue), combat (red).

This update is on the lighter side, the next one might be much beefier. 0.9.3 Nightmare is coming! Apart from obvious content for the high level players, we'll also add signifcant changes for everyone :). The update should land in 3-4 weeks from now.