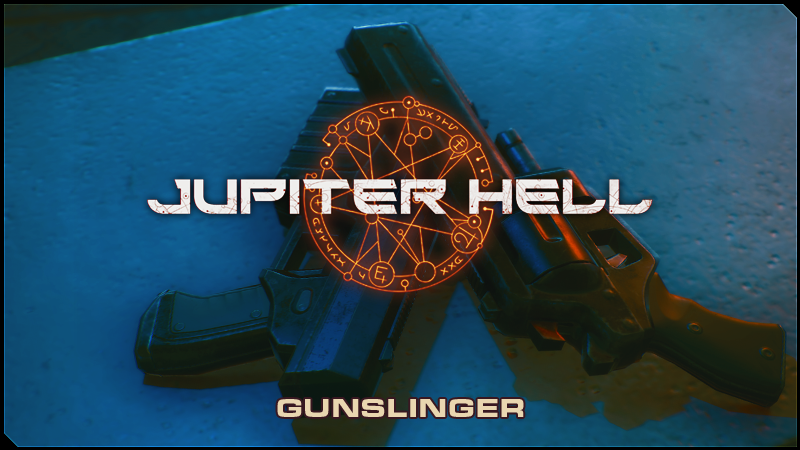 Introducing Jupiter Hell update 0.8.8 a.k.a. Gunslinger! A most requested DRL feature is making a comeback - dual wielding of pistols! Apart from that, there's new stuff to find, balance changes and bugfixes, so let's jump right in!

The new Marine and Scout trait allows you to finally relive your Hollywood fantasy and run in guns blazin. With this trait you can dual wield pistols, revolvers and SMGs or any combination thereof. Game-wise this is achieved by having the trait and two consecutive slots with applicable weapons - you pick the first and it wields both! Both guns are shot at the same time, and reloaded at the same time - with a slight penalty. Not to leave Tech in the dust, we moved to him the Headshot trait (which still is very strong!). To celebrate the new trait we're bringing back the fan-favorite DRL challenge - Angel of Marksmanship!.

Balancing healing items has been a pain for us, until we reminded ourselves of a feature that should have been there from the start - health orbs! These are powerups that you pickup automatically when you walk over them. But fear not that you need to avoid them not to waste health points - they overheal with no penalty, so there's no reason not to pick them up on sight! Contrary to their original implementation health over 100% doesn't decay, but is reset back to max at level exit. Thanks to that we've been able to balance health drops better and it will be easier to balance health in the future as well!

There's new loot to be found, rare mods. Contrary to regular mods, these do not increase statistics, but bestow known ADV traits on any weapon (ADV and Exotics not excluded!) you wish that has a mod slot left. There are five of those available now, Frenzy, Loader, Vampiric, EMP and Cold - we tried to pick those trats that will make finding one of them always useful. More may come in the future. With a bit of luck you can now build some really overpowered shit :P

The three most boring level generator layouts in Callisto have been improved, and all Callisto generators were fixed to drop the requested amount of loot boxes and support vaults if present. In general especially on easier levels there should be more items found in the early game.

Apart from balancing pistol traits due to dual wield being available, we gave a general range buff to ALL shotguns. They should feel a bit better now, without giving too much buff to those pesky sergeants. We also made a significant balance pass on late game enemy presence and a bit on stats - in general the amount of armored ravagers has been reduced, and CRI bots nerfed a little (they now come in two equally common variants, the other has a plasma rifle-like weapon). We're keeping a close eye on later game balance and will probably do more changes there next update!

Long requested UI/UX enhancement - there's a new panel (shortcut "v" on keyboard or switch panels from inventory) with the list of all available traits - colorized and browsable with info what is already picked. Additionally you can also look up class information if you didn't pay attention on the class choice screen :)

And finally for the masochistic among you is a Challenge of the ridiculous sort (hey, people DID beat Angel of New York Reload!), which is a variation on the Angel of Pacifism theme - each kill drains your maximum health! You get some extra experience each level to offset it a bit though - good luck, you're gonna need it!

And finally the regular batch of fixes is in, those that weren't serious enough to be hotfixed - list in the changelog.

Next version (0.8.9) will come out within the next few weeks. Originally we planned to do Melee next, but quite possibly we'll do a content release before that, with more generator improvements, special level improvements, overhauls and additions, a new enemy and more new stuff in general - stay tuned!