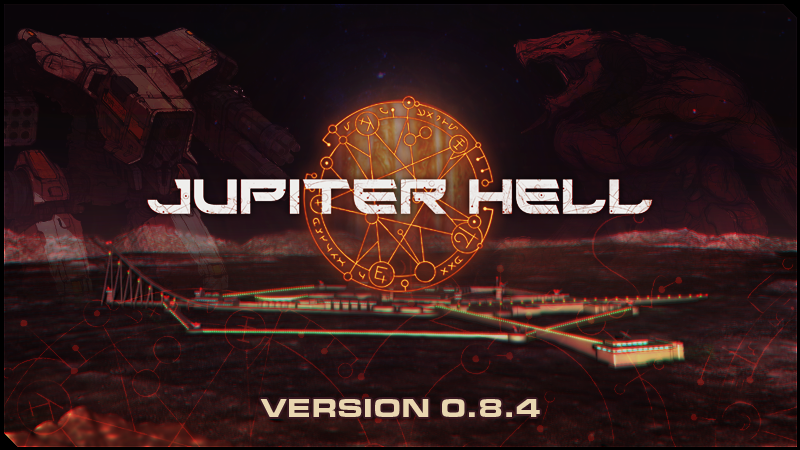 Time to outsmart hell itself! The major 0.8.4 update is now live and most notably introduces a full overhaul of Jupiter Hell's AI system! Enemies now can hear you, smell you and humanoids know the value of cover!

Infernal Intellect
The AI system has been completely rewritten - humanoids will now take and stay in cover if close, and most of the enemies will react to the noise you and other enemies make! To make things more interesting, fiends and ravagers can now track you by smell - there's nowhere to hide from them! The new AI increases the general difficulty, but makes (especially the early levels) the game more interesting - just standing behind cover and mashing "F" is no longer the best tactic - sometimes you need to retreat to bait the enemies to follow you, and often you'll be ambushed by enemies following you by scent, or interested in the noise you made.

Weapon Perks
The other big update is the introduction of weapon perks on ADV weapons. Take careful note of them as they might prove much better than regular modded weapons or exotics especially if the perk requirements are met. Perks for example can increase damage based on the type of enemy, your distance to them, whether they are wounded or make reloading of the weapon really fast if its empty, or even automatically reload on move! The perk list will be slowly expanded both in variety as well as adding them to other items in the future!

Quality of Life
Two "quality of life" features have been added - an audible click on wait, and highlighting the last enemies on the level on the minimap (doesn't trigger on levels with summons). We also made "swap time" actually work propely, which also changes a lot - we reduced the 200% swap time weapons as this might be a bit much, especially for seasoned players.

Balance Changes
Due to the AI changes we made some enemy nerfs - Callisto formers are less accurate, and the UV enemy buff of accuracy has been reduced to +10%. Speaking of UV, we also made it so that there are no "lucky drops" of early late game weapons - to provide for a more consistent early game.

We nerfed P-mods a bit, as they basically reduced endgame to P3-modding a rapid-fire weapon - to offset that, summoner armor has been nerfed and now everyone can single-mod ADV weapons and everyone has two levels of Whizkid. This is subject to change soon, as we'll be doing a full mod overhaul in the near future, so stay tuned!

Full Changelog
Next Update
Due to Game Industry Conference coming next weekend, the next update (0.8.5) will come in around three weeks time, although you can expect a bugfix version or two within the next few days :P

Help us out!
Please tell us what you think of the recent changes, in the comments, on the Forums or on Discord!

Also, we're launching this update with a discount, so if you're a dedicated player it's a great moment to share Jupiter Hell with your communities :)