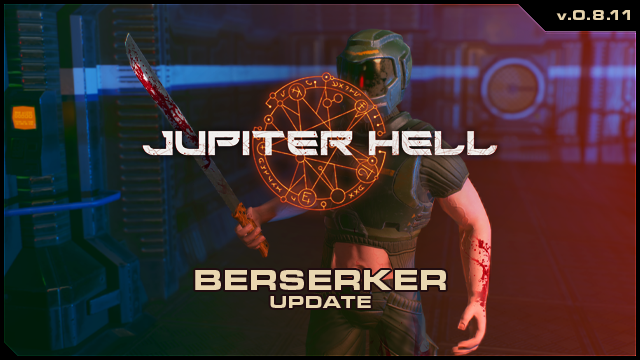 The much awaited Jupiter Hell update 0.8.11 a.k.a. Berserker is live! The theme is unsurprisingly melee combat, but new general traits have also been added and the gameplay flow of the player classes improved! Read all about it below!

Apart from return of the chainsaw, we've added a couple more melee weapons (katanas in space anyone?), added melee focused traits and improved melee synergy of others.

A disclaimer first though - Jupiter Hell is a game of ranged combat - trying to play it melee only is much harder than any ranged build. That said, melee excels in late game in dishing huge amounts of damage! Right now it's almost viable to main melee late game, and once Masters hit next release this will definitely be true! Now however it's quite useful as a hybrid build - if they get too close, they're toast!

There is a new Melee help topic in the game with all the needed information! Especially if you want to try out Angel of Berserk, the obvious challenge addition for this release :)

Apart from the aformentioned chainsaw, you can find several tiers of melee weapons, some of which even have ADV variants (anyone want an ADV machete?). Bladed melee weapons are special, utilizing Melee Guard mechanic - if you're close to enemies you get an extra dodge bonus. Speaking of mechanics - you both can bump into and "F"ire a melee weapon to attack (also diagonally), and you'll move to the enemy space at kill. If you want to prevent that (i.e. not stepping out of cover), you can hold SHIFT when pressing attack to prevent that.

In the melee department, Marine gets Rip'n'Tear that generates more Fury on melee kills and provides a damage bonus based on how much current Fury you have. Tech gets Bladedancer which doubles or even triples Melee Guard values, and Scout gets Swashbuckler that instantly switches to a melee weapon if one is present on melee attack and Energy Leech that produces Energy on melee kills.

Apart from that we added new traits useful in melee builds, but also useful in general - Scout gets Dash which makes consecutive moves in a given direction be twice as fast (and a critical bonus at L2 if dashing into melee), Tech gets Juggernaut which reduces enemy damage when moving towards the targeted enemy and Powerjack that allows to siphon Power from Terminals, and Marine gets Running, similar to the now removed Scout Running, but fueled by Fury instead of once per level. Angry Motherfucker now gives bonus damage based on missing health, not pain.

Lots of smaller changes in the Changelog below, we also removed some less used traits to make room for new and future stuff.

We've removed Arena from Beyond (it was kinda boring, it might return in an improved form!), and in its place there's a hidden new special level. No spoilers :P

We've improved performance a bit, and also improved visual quality (esp. normal maps). Addionally we did an improvement pass on enemy animations and FX (work in progress). Finally some of you might notice the game running smoother, even within the same FPS range.

And of course the regular batch of bugfixes, the major ones listed below. Two things of note is that AI will no longer without provocation perform infighting, and that the guaranteed plasma weapon drops on Io L1 will now be present on higher difficulties.

We're slowly reaching 0.9.0 Masters - the release everyone is waiting for that will introduce Master Traits :). The release is scheduled for April 27th, but we may squeeze in a smaller 0.8.12 update before that! Keep your eyes open and tell us what you think of this new release!