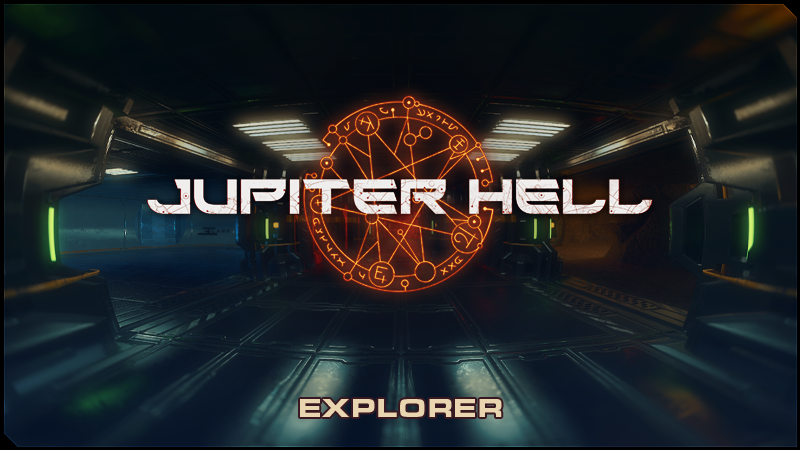 Time for Jupiter Hell update 0.8.10 a.k.a. Explorer! The main theme of this update is revisiting Special Levels (including adding a new one too), minimap (and maximap :P) improvements, basic melee to prep us for Berserker, Scout and Marine class skill buffs and a lot of minor improvements!

We made a pass on all special level rewards to make them feel... well, more special. Some of the levels have a reward drop based on your most commonly used weapon group, some have now unique items/mechanics as rewards - check the full changelog below!

Blacksite Vaults and CRI Armory red doors are now indestructible - the rewards are improved however, and there's always one red card to be found on the level. Valhalla Command has received a significant do-over along with a unique reward for fully clearing it!

Interesting unique rewards have also been added to Tyre Outpost and Containment Area. The backpack has been moved to Refueling Base.

We also introduced our first "alternative" level - instead of Military Barracks you might encounter Callisto Docking Bay - tell us what you think of it!

Also, you might notice that some places in Europa look a bit better this update :).

Our long term goal is to have each level have it's own flavored gimmick, and unique reward. Also, we plan on most levels to have at least one "alternative" later.

To continue the theme of exploration, we finally added the option to configure minimap size - now you can choose between the old size, or two larger sizes. If you need to see the map even better, you can get a screen size map on screen (by holding "m" or left bumper on pad).

One of the major changes this patch was a revamp of the melee system in preparation for the upcoming Berserker update - all ranged weapons now have a melee attack, that you can use by bumping into an enemy, or forcing a melee attack with SHIFT-F (even diagonally). As there are no melee traits yet (wait for Berserker) the damage is not gonna be large, but may still be used as a ammo conserving finisher. More significantly, humanoid enemies will now always melee if in range 1 - which can be (ab)used to your advantage!

Technician is currently the most powerfull class, and Scout the weakest, so time for some buffs!

Marine Adrenaline was the most complex skill to use, but we wanted Marine to be the "base class" - to fix that, but not lose Adrenaline's interesting mechanics, we changed it so it ALWAYS heals for a set amount of health, but heals more if convert pain. This allows it to be a panic button even if you forget to heal after the shotgun face hit, yet still awards the better player with more health if used in the proper situation.

Scout invisibility doesn't break smell tracking as opposed to techs smoke. To offset that, we're giving Scout a whopping +100% to critical chance when firing from stealth. Now those Skilled stealth shots are worth even more!

Accuracy mods now increase optimal range of a weapon instead of adding a flat accuracy bonus. This is actually a buff, especially in the case of weapons like SMG's or revolvers. Additionally this works for shotguns as well, increasing the distance to which you do full damage and the damage fallof starts! Additionally, ADV weapons now can roll with improved optimal distance.

You'll notice that the red keycards are now more important, and we've added a lot other stuff since the last inventory size upgrade, so we decided it's high time to increase default inventory size by 2 to make your exploring a bit less tedious.

Vaults can now have hold technical stations or the new manufacturing stations instead of the purple box. We increased the safe zone when entering the level (less near spawns), and changed the enemy amount curve a bit, reducing Callisto and Europa (to a lesser degree) enemy count. We buffed both .44 ammo exotics, did minor performance improvements, and fixed several bugs. See full list in the changelog below.

Next version will be the long awaited Berserker update - melee weapons (not just the chainsaw :P) and non-master melee related traits! We hope to squeeze some smaller changes in too, so even if you're not a melee fan you'll have something to play with :P. And after Berserker drops, it will be full speed ahead towards the Masters update! Drop by our Discord to see stuff unfold in realtime :)