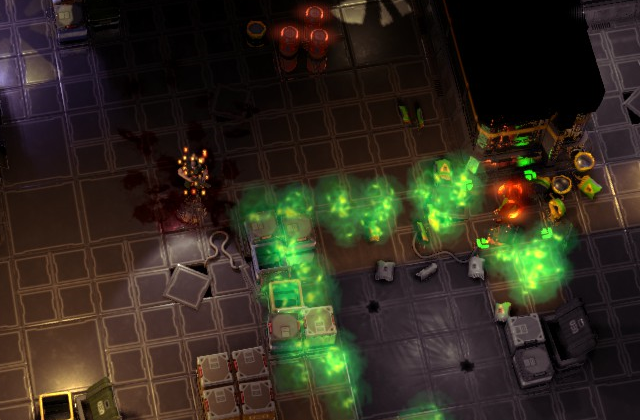 Hello marines! It's time for the first content/feature update! 0.8.1 is now deployed and you should be able to download it (you might need to fully restart your store client for the update to trigger).

Please note there's no save compatibility - your previous run will be silently deleted. Your progress and statistics should stay unaffected.

We've implemented a lot of changes and features, many of them suggested by the community - you might find one you suggested in this list :).

As far as new stuff goes, you'll mostly notice the damage types - EMP, Toxic, Fire, etc. Barrels now behave differently based on color, old enemies might have new attacks, and cyroreavers and toxic reavers will introduce you gently to the new damage effects. And to turn the tables you have access to new grenades - EMP and Gas (note that the old grenades have changed colors). There's a lot new exotic (magenta) weapons too!

Speaking of weapons the cell-weapon tier has been added - rifle, pistol and shotgun (bye bye armor :P). They all do plasma damage, which mostly behaves like pierce damage.

Early game benefits from slightly different gear between classes and a new Level 1 generator that eases into a given run by providing a more balanced first level clear. We also balanced armor and health drops a bit.

We're slowly working on improving Io too - you'll find the new Blacksite special level to be something a bit different from the old ones :).

AI has been more agressive. We'll be working more on the AI later, but you should definitely be able to kite demons now.

Angel of Shotgunnery has been moved to a higher rank requirement, and Angel of Carnage (which is subjectively more fun) has been unlocked in its place instead. AoSh should be easier now though, as we allow the use of grenades (and the plasma shotgun eats armored enemies).

Tough as Nails has been reworked to reduce the accuracy penalty instead of pain, and do it on a 50%/100% level.

UI wise, we've added a item description modifier (SHIFT or LTrigger on pads), which allows you to see the stats of a weapon on the ground (and compare them to the held weapon - nicer UI improvements comming to this later!), but also allows you to use the pickup key while held to use the item immedately from the ground.

Finally some visual improvements were done - to the particle and sprite effects and icons and to the visual rendering equations.

Apart from a potential bugfix release, the next update (0.8.2) probably will appear in two weeks, however it will be slightly lighter on content, as we'll be half or this period attending Gamescom. You can expect further gameplay improvements by that time though!

Thank you, and good luck!