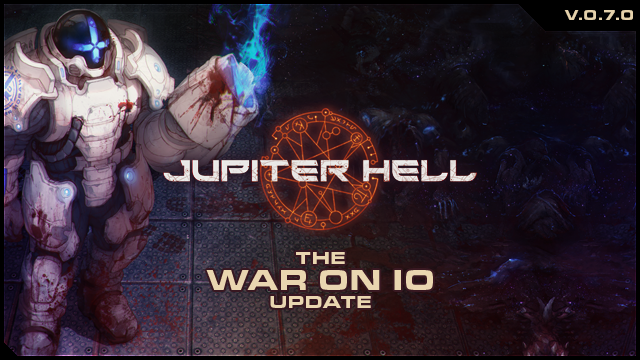 Welcome to Io, Marines - there's a war raging! There's a lot of meat in this release so gear up and get ready (and restart Steam to force the update!)

We’ve added a whole new level, Io, placed between Europa and Beyond. On Io you'll encounter CRI - a "good" corporation who came to take out the trash. Unfortunately, that also includes you. Two new enemies from this faction can be encountered - CRI marines and CRI bots.

NOTE: Io and it's content is a work in progress - there's only one branch, no special levels, and no new weapons (yes, they're coming!). Our next update should address that so stay tuned!

We’ve also added a full-blown tutorial for new players or to refresh your memory. Technically it's mandatory, but if you really don't want to do it, set skip_tutorial to true in the options. We’ve also included is a more robust help system.

Each of the three classes has gotten an active skill that is available from the start, and is usable once per level. Marine acquires Adrenaline which can convert your pain factor into health, Scout has gotten Stealth, which is basically a short-term invisibility (broken by attacking though) and Technician has a Smoke Screen which works exactly like a smoke grenade thrown under your feet!

These are special rooms that appear on some levels, that have locked doors. You need to find a terminal to unlock them and inside you'll find some more difficult enemies. You'll find a special box too though!

We're starting modestly with 3 classics making a comeback - Light Travel, Shotgunnery and Impatience, updated for Jupiter Hell. Also joining are Carnage (Rockets only) and Confidence (warp to Europa). Each of the challenges is accompanied by 3 badges that you can earn - no ranks yet, but that's coming too (unfortunately we had to invalidate earned medals to implement it, that might happen from time to time before we go into EA).

We’ve taken a look at the scoring system and revamped it so it’s easier to understand:

We’re pretty happy withe this as it makes a bit more sense, but let us know what you think!

Finally there's a lot more music added to Callisto by our Roland La Goy, and a general sound update for the enemies - turn those sliders up :P.

So that’s all for this release, Marines!