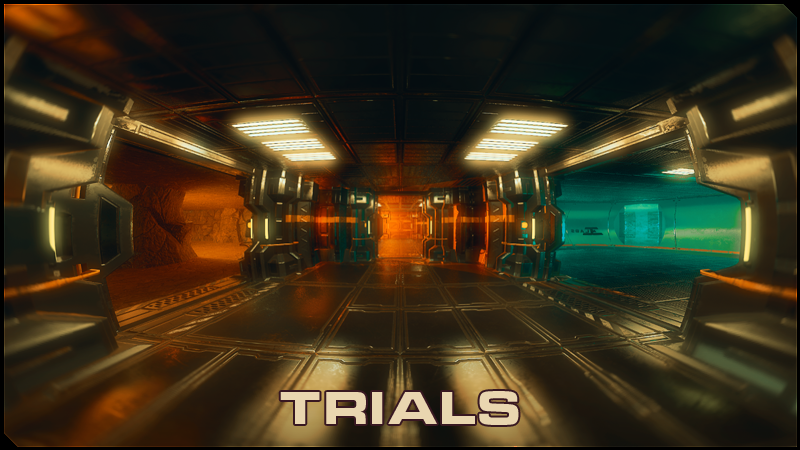 FULL RELEASE IMMINENT - JUPITER HELL 1.0 INCOMING
"Trials", a.k.a. Jupiter Hell 0.9.12, marks the final Early Access update as the game will be graduating Steam Early Access and
releasing in full on August 5. A long, ambitious, and - let's not be afraid to admit - crazy development cycle is coming to an... climax. Yeah, let's go with climax, as in no way 1.0 marks the end of Jupiter Hell updates.
If you've been eyeing the game for some time now and don't have it on your wishlist yet, be so kind and correct that obvious oversight now. If you do have it on your wishlist - remember to get Jupiter Hell at the full release date or soon after, so you don't miss the special release discount. Now, let's see that over-the-top cinematic teaser-trailer thing, to whet that appetite!

Jupiter Hell 0.9.12 "Trials" is live!
The highlights of this release are a new type of challenges, the eponymous "Trials", that change the layout of the game. Furthermore you can now play the same random layout as other people thanks to the "Preset seed game" mode. New message quests (and one new level event) have also been added, as well as updates to the game voice over, as well as new intermission screen music! Finally balance changes and a TON of fixes have been made, read all about it below!

Trials are a separate category of challenges that modify the game world instead of the player. Our initial lineup of Trials is as follows:

Purity - no-bullshit, no special levels, no quests but a higher chance for random exotics and uniques!
Haste - half the levels, twice the experience - for the times when you want a shorter, more intense game!
Endless - ever wanted to see the limits of your characters power? Try your wits in the endless challenge!
Arena - fight off waves of enemies in the Arena!
Royal - the Jupiter Hell "boss" rush - only special levels, but you get to pick the amount and order!
Of course each Trial comes with its set of badges to earn!

Finally a use for that Seed number that has been lurking in the top left of your screen. Had a big stroke of luck with items? Share the level generation seed with others! Want to compete against others on the same generated levels? Share a seed and see who gets the best score!

(note that seeded games don't unlock achievements, badges, found items, and are not recorded on the highscore list)

A whopping 48 new messages are to be found, split into six new message quest types. Two of those are linked to the new potential level event - Toxic Contamination. Take note, as this one can definitely be a double edged sword!

Not only did we add a fresh supply of voice lines from our favorite commander Mark Meer, we also added a new setting for those that don't like the tongue-in-cheek style of the Jupiter Hell VO, but don't want to turn it off altogether - the Serious tone. It also automatically turns on when you get to the endgame ( ͡° ͜ʖ ͡°). Along with the new voice lines comes the option to turn on subtitles, and new voice events - for example a notification that there's a randomly spawned unique in a chest on this level!

Additionally we fixed some voice issues with encountering exalted packs and picking up new weapons for the first time.

Our metalhead musician, Roland LaGoy, provided us with 3 brand new tracks for the intermission screens! The final "intermission" will change once Dante Station appears next update!

Apart from adding subtitles, several other improvements have been made - post-mortem report now shows a log of what actually killed you and how much damage it did, challenge and trial choice menus give details on what Badge you already acquired, and what are the requirements for the next one, and all places that are locked behind ranks list the amount of Badges you need to earn to unlock them!

Taking a look at unlocks, we moved some stuff around a bit in terms of the unlock level. We also locked challenges to Medium+ difficulties (it's supposed to be a challenge after all!). Medium+ is also the requirement for opening the portal to the Shattered Abyss.

Monster, Bloodletter and Love have had their damage buffed. More importantly, all non-exotic/non-unique automatic weapons got a blanket +1 buff to damage to bring them in line with the other weapon types. On the flip side, Exalted Summons encounter has been made more challenging, and we blanket increased the enemy density - because Jupiter Hell is most fun when it's crowded!

Apart from the already mentioned subtitles and voice options, volume default settings have been adjusted, and the volume settings better reflect the perceived volume. On the visual side, you can now configure draw distance (and if you are in low-FPS-land you probably should play around reducing those). Speaking of FPS, the awkward FPS counter is now turned off by default, but if you're nostalgic, you can bring it back through the Settings menu too.

Apart from fixes already mentioned, we also fixed the Fiend Crown/Frozen Temple interaction bug, and hopefully finally squashed the kill count bug that lingered around CalSec Central. Quite a few bugs have been squished, some more highlights are listed in the changelog below.

What else is there to say? 1.0 is next :). And with it we'll finally invite you to board Dante Station and cleanse the evil within...
Stay tuned for August 5th and Jupiter Hell coming out of Early Access!
SHARE NEWS ON: fb tw
◄ PREVIOUS NEWS
NEXT NEWS ►
chaosforge hs
nova
steam gog humble ks yt twitch reddit discord tw fb